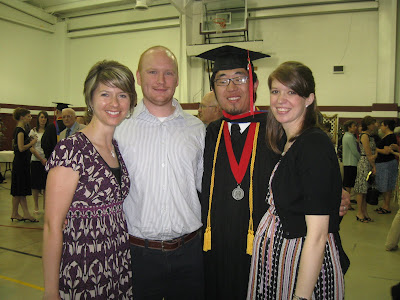 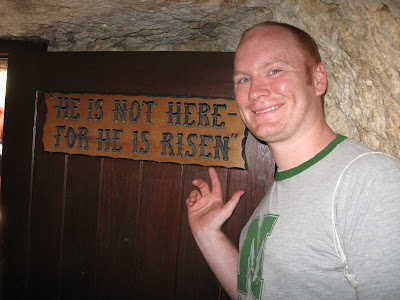 The mystery of the cross I cannot comprehend
The agonies of Calvary
You the perfect Holy One, crushed Your Son
Who drank the bitter cup reserved for me

Lover of my soul
I want to live for You 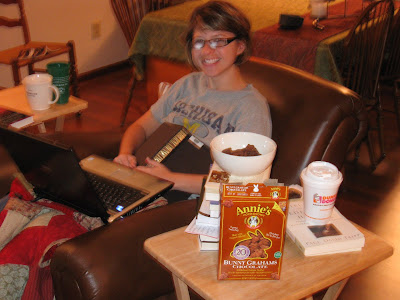 No, it's not just you - the picture is blurry, but I thought 'What an appropriate picture to illustrate the week - i.e. it was a blur'. And with much encouragement from my husband (he brought home Annie's Bunny Grahams and Dunkin' Donuts Coffee - what a wonderful man!), I turned in my first Seminary level paper...sigh...now to clean the house.

... and yet, I'll find a few moments tonight to say hello to the blog world. Mainly to solicit your thoughts on balancing life. This has been a really busy semester for John and I. And though I have always considered myself very organized and on top of things, I'm hearing a few 'plates' hit the floor occasionally. Which is frustrating to me and my peculiarities. My situations and plans have yet again shown me my need for a Saviour. Someone to save me from obsessing over calendars and commitments. And also, in the midst of all the 'good' things - why am I doing it? Where is Christ? Let my eyes be lifted to Him in the midst of my small trial and find contentment in the place He has put me.

One of the things that has filled up my calendar this semester is my Intro to Biblical Counseling Class. This class has been so eye opening of the world views that find their way into our churches and counseling discussions. I think about the desperate situations that people find themselves in and my heart is warmed to know that the Gospel meets every need - we have a Messiah. And I have been convicted of all the ways we can fabricate our own messiah apart from Christ. Left to ourselves we can reason and diagnose, but there can be no permanent healing or joy and peace until Christ is enough. It has caused me to meditate on Isaiah 53 - one of my favorite passages. Take a moment to read it and meditate on our Messiah in the midst of our busy schedules.

Isaiah 53 Who has believed what they heard from us? And to whom has the arm of the LORD been revealed? For he grew up before him like a young plant, and like a root out of dry ground; he had no form or majesty that we should look at him, and no beauty that we should desire him. He was despised and rejected by men; a man of sorrows, and acquainted with grief; and as one from whom men hide their faces he was despised, and we esteemed him not. Surely he has borne our griefs and carried our sorrows; yet we esteemed him stricken, smitten by God, and afflicted. But he was wounded for our transgressions; he was crushed for our iniquities; upon him was the chastisement that brought us peace, and with his stripes we are healed. All we like sheep have gone astray; we have turned every one to his own way; and the LORD has laid on him the iniquity of us all. He was oppressed, and he was afflicted, yet he opened not his mouth; like a lamb that is led to the slaughter, and like a sheep that before its shearers is silent, so he opened not his mouth. By oppression and judgment he was taken away; and as for his generation, who considered that he was cut off out of the land of the living, stricken for the transgression of my people? And they made his grave with the wicked and with a rich man in his death, although he had done no violence, and there was no deceit in his mouth. Yet it was the will of the LORD to crush him; he has put him to grief; when his soul makes an offering for sin, he shall see his offspring; he shall prolong his days; the will of the LORD shall prosper in his hand. Out of the anguish of his soul he shall see and be satisfied; by his knowledge shall the righteous one, my servant, make many to be accounted righteous, and he shall bear their iniquities. Therefore I will divide him a portion with the many, and he shall divide the spoil with the strong, because he poured out his soul to death and was numbered with the transgressors; yet he bore the sin of many, and makes intercession for the transgressors.

My sister Steph lives in the cutest little vintage apartment. I visited her last month and just loved the pieces she had chosen to decorate with. Her motto - only decorate with the things you really love. Her little place is so reflective of her personality and taste. She's inspired me to think differently about the things I bring into our home.

So, this past weekend when we visited Kansas (more pictures to come on that) my sister-in-laws and I hit up the local thrift store and I was so pleased with the unique vase I found. So pleased, that I flew with it on my lap home to Virginia from Kansas - and it made it with no incidents! A few things I love about it - there's no seams in the texture, the bottom is imprinted (I'll have to do some research on that), and it has weight to it with a great shape and a fabulous price! Great finish to a memorable weekend with the family! (free flowers from the tree in the backyard topped off my deal!) 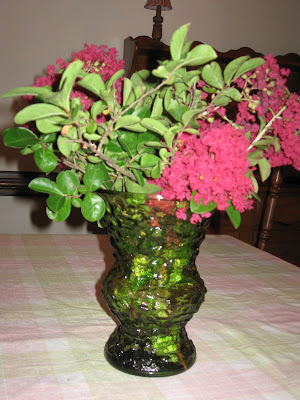 So, here we are with a Sunday night without something to do... finally a moment to sit down and post some pictures on the blog from Israel. I was just thinking about it yesterday. I find myself actually missing Israel and our trip we took. It was just that great. I told John last night that when we talk about Christ or the difference Jesus makes in our lives my heart emotionally warms to the thought of my Saviour (yes, I know that's the old English way to spell Saviour - but I love to spell it that way because of the 'our' at the end, He's our Saviour). I just sat down and looked through some of these and I thought it would be an appropro time to finally post some, considering we're finally settled at home and getting back into routine. These may be random, but they are some of my favorites - Enjoy! 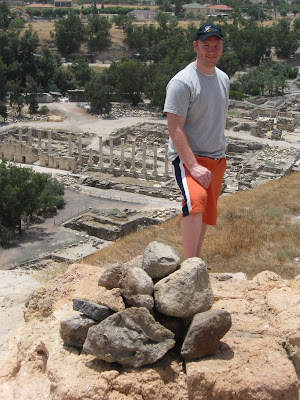 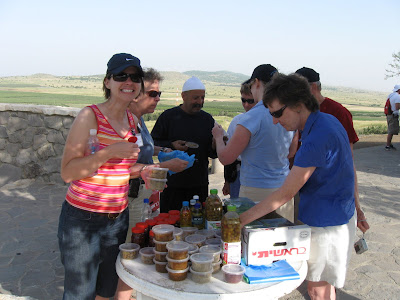 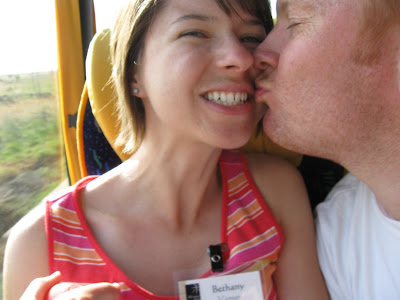 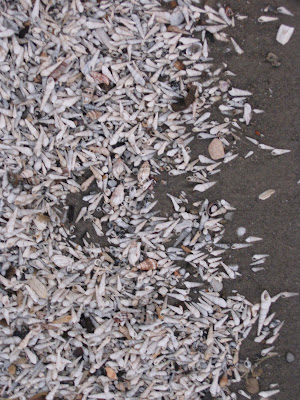 Mosaic of shells on the Sea of Galilee 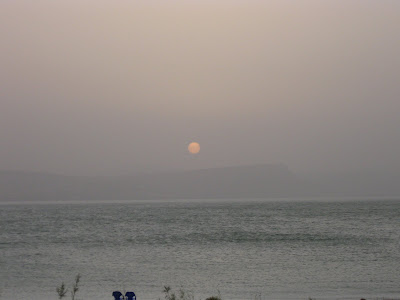 The Sea of Galilee (my favorite) 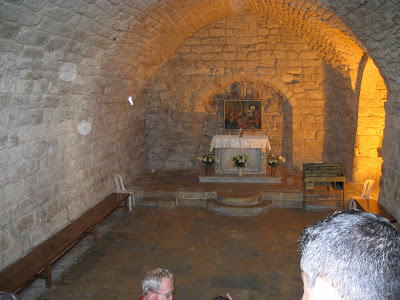 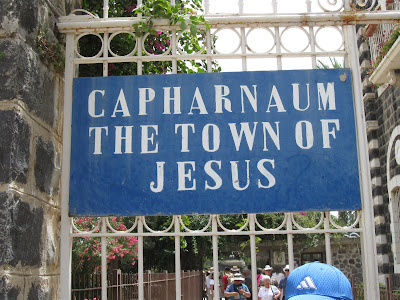 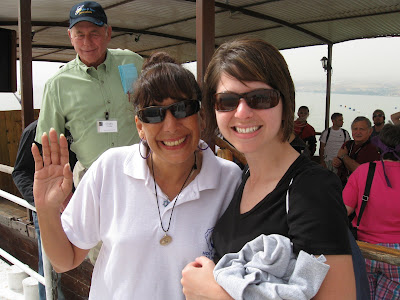 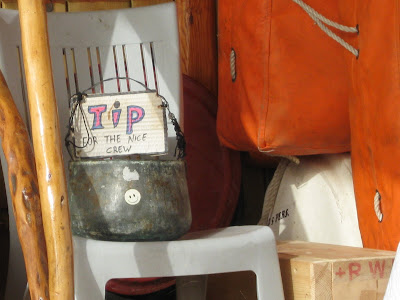 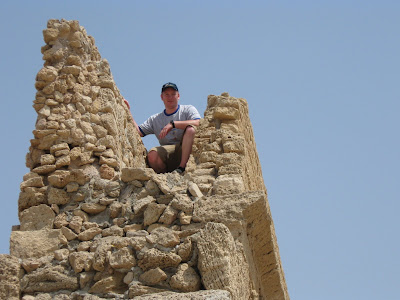 An aqueduct along the Medditeranean Sea by Cesarea 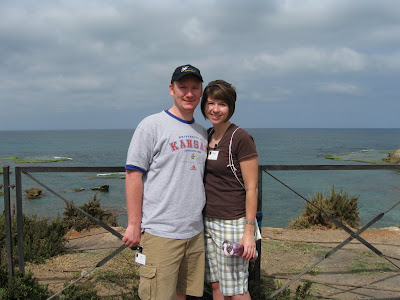 Herod's Palace along the Medditeranean 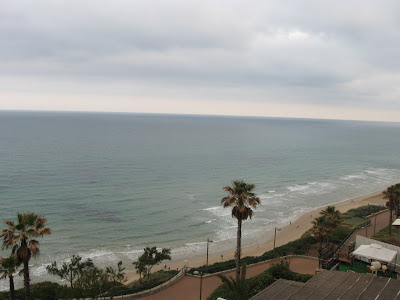 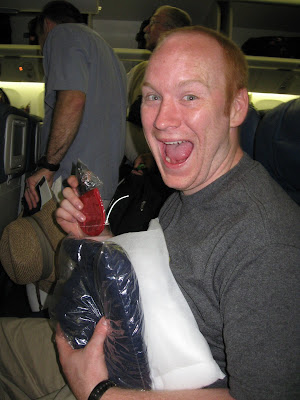 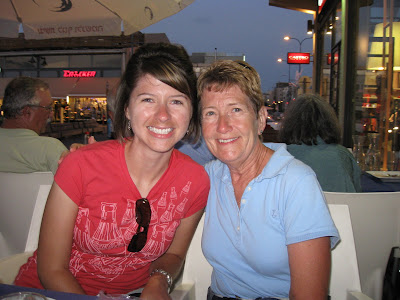 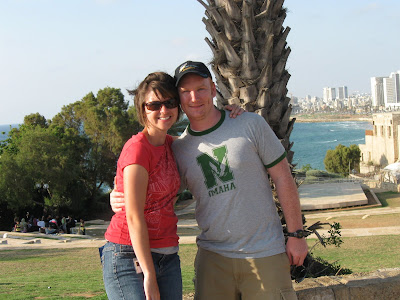 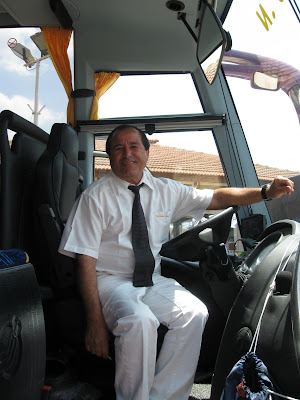 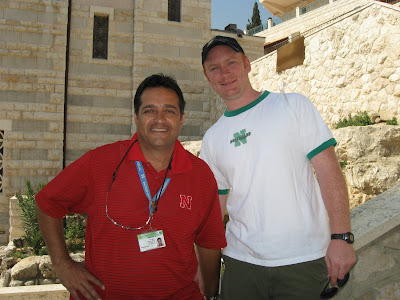 John with our tour guide, Yuval 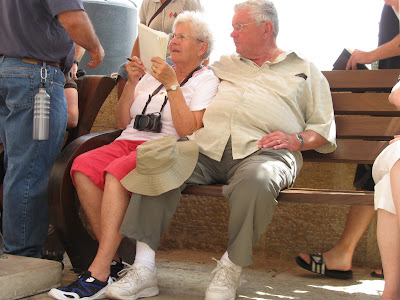 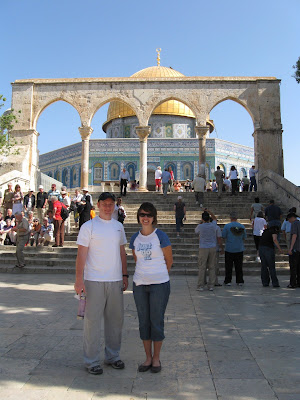 Dome of the Rock - we weren't allowed to touch or show any affection while we were visiting this holy site... 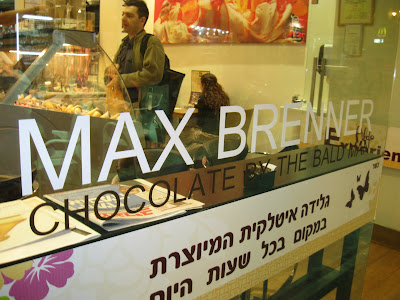 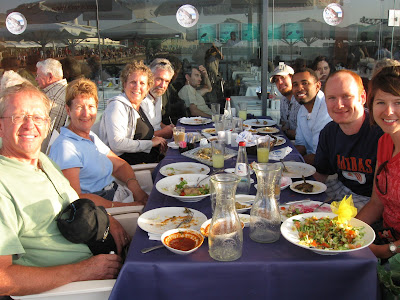 Our First Grown Up Anniversary

Tomorrow is John and my 3rd Wedding Anniversary (!!!!) I think, Wow. I'm calling it our first grown up anniversary because it's our first anniversary since we have been married that we are both working and not taking the day off to leisurely hang out. With our new home on the horizon and new floors coming into play - it's off to work we go. (Thank the Lord for the good jobs He has given to us that He uses to continually provide for us).

Anyhow, I think of where we are right now in comparison to Day 1, Year 1, 2 and now 3. It has gone so fast so far. And I beg the Lord to give us many years more. Sometimes I think of what life would be like without John now that I have had him in my life. Morbid? - possibly. I tend to be morbid by nature, I suppose. However, it does make me hold him tighter and sit closer to him when I get the chance. I have such admiration for him for so many things. One thing primarily - he has taught me to not take myself so seriously. I never knew he was so silly and funny until after we were married - never knew I needed that in my life and I needed to change and laugh more and contemplate less. If I am amazed at how the Lord has changed us in three years, I can only imagine how He will continue to use our marriage to sanctify our lives for his honor. It's good to look back and remember. It's puts life into perspective.

I cherish what my husband has brought to my life. I can only hope I add as much to his life as he has added to mine. 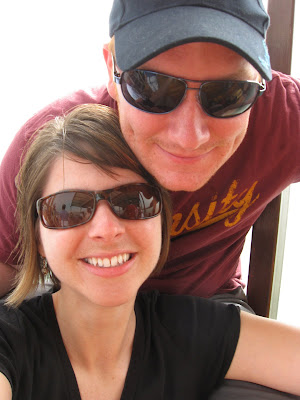 On the Sea of Galilee in Israel a few weeks ago...