So many things to be thankful for... 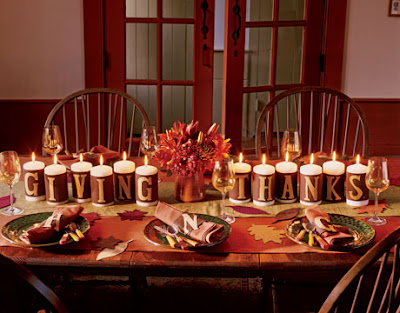 I would have titled this blog the same if I had written it last week, but even more so after this week. John and I have seen God interact with us in a special way over the past few days and since this afternoon my fingers have been itching to blog about it and put my thoughts down.
On Monday morning as I was backing out of my parking spot in front of our apartment my bumper was side swiped by one of neighbors. A paint job is the main thing it will need. The car is still driveable and neither one of us was injured or hurt. It was an inconvenience that made me late for work, but it could have been worse.
Last night we dropped my car off at the local mechanic shop for the state inspection. John had noticed his battery light had lit up in his car but after a trip to Auto Zone found out the battery was in good shape. He figured that the alternator must be going, but it may be a while.
This morning, I took John's car to work and drove home to meet him for lunch and to go pick up my car from the mechanic shop. When we got in the car the battery was dead and the car wouldn't start. At just this moment our neighbor drives up (different than the one who I had an accident with on Monday am) in his work van and is able to jump start the car. So, we start off...again... only this time the car starts jerking and not shifting and the gauges on the dash board aren't working! I wasn't sure we were going to make it to the mechanic shop, but thank the Lord we did. We also began to wonder if the alternator was instead the transmission going...
Many things to be thankful to the LORD about in the midst of this...

1. My accident could have been much worse.
2. John's car behaved while I was driving (because I would have not known what to do if it had started acting like that while I was driving)
3. Our neighbor drove up just as we needed him.
4. We made it to the Mechanics.
5. My car was driveable - so thankful an accident had not rendered it useless
6. We had left extra early so John wasn't late to work (small, I know - but important).
7. The Lord will provide for the repair, whatever it is...
8. More details to come on #8....
9. Not every day I get extra time with my husband on a ride to work!

I do have to say that the beginning of this week has felt a little bit like falling down the last few steps of a staircase - bump, bump, ? but we are so thankful for our God's provision and even the way He has turned our hearts to Him! We don't know the outcome yet but we trust Him. Hasn't He been good? So, I guess I would sum up the rest of my Thanksgiving as follows...

Running is better with good shoes... 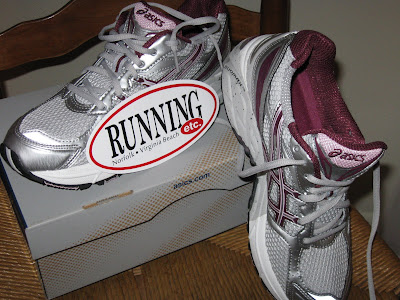 Recently, I have joined a Fitness Group at work that has exposed me to running again. I used to run a lot in college and since we were married I have fallen away from running. One of my new friends at work freakishly enjoys it and I have to say that the exposure has been contagious! I have been slowly working back into running and realized if I'm going to be serious about this it's time for some new shoes. So, today John and I took a trip to Running Etc. in Virginia Beach. What an experience!! Not only do they watch you run on a treadmill to see the 'pronation' of your feet as you run in order to outfit you with your best shoe, but they also bring out A LOT of shoes for you to try on and they spend time educating their customer. I had a blast! We really should have taken the camera along so I had pics to post other than just my shoes. The odd thing is that when you walk in there you aren't going to be buying shoes because they are cute...it's more about function (which is not how I normally shop for shoes). I learned that I had been buying my tennis shoes with the wrong perception of what I needed. I love experiences that teach and broaden perspectives. So, we'll see how they work out over the next few weeks. There is a Shamrock Half -Marathon (you can also choose to do 8k or 5k) in March...if the shoes work out well, I may be participating in my first race. Once again - something else to experience to broaden my perspectives! 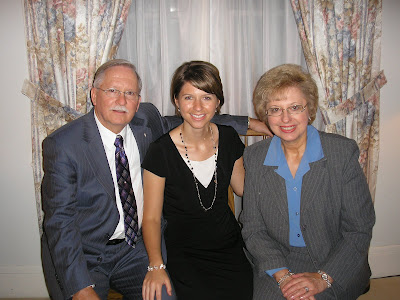 I have been looking forward to this weekend for a long time; possibly since mid summer. Every Fall my dad and mom come for a visit. It's normally in October, but this year we had to push it back to November due to a busy month in October for my parents. So, I waited all through September and into the beautiful Fall days of October waiting for the second weekend of November to roll around. I had made changes around the house, bought their favorite biscotti and cereal, planned to have coffee mugs they would enjoy and activities that would suit my vacationing folks. I was so excited. This would be the first time for my parents to come and see the University and there are always people I want them to meet at church and work. They were supposed to arrive today. Monday my dad called to tell me they weren't coming. Due to circumstances that only God could have put into place, they decided that this was not the time for them to come. It hit me harder and sadder than I expected. It's so special to have your parents come to your house - it's your turn to take care of them. And I have really missed my parents since we have moved. I was the last one living at home for 4 years before I was married. In those 4 years we became such good friends. Long dinners and going for coffee on afternoons I didn't have to work - conversations I have missed. Another reason I was looking forward to them coming - couldn't wait to spend some time with my friends like we do each Fall. I had planned for coffee, breakfast, explore a historical site, and find a great restaurant and celebrate their birthdays on Saturday evening. All things that are not happening this weekend.

It's just one more way we learn to trust the Lord. It's one thing to be content when circumstances fall into place as we had planned and hoped and another to be content when we don't understand why the good things we have hoped and planned for don't come together. The important thing is that we can trust and find contentment in our Sovereign Lord. He knows what is best and He only gives us what is best.

'For the Lord our God is a SUN and SHIELD, He gives GRACE and GLORY. No good thing will He withhold from them who walk uprightly. Blessed is the man who trusts in HIM."

Did you get your sticker today?

At 5:30 AM this morning (after doing laudry until midnight the night before) John and I donned our sweatshirts, warm-up pants, tennis shoes and umbrellas to stand in line with over 200 other people to get a sticker...and we did...after a two hour wait in the pouring rain...and it was cold! (and one of my first thoughts at 5:30 in the morning as I was struggling to sleepily pull on my shoes was, 'At least this is blog-worthy':)) I was so tired and cold, but I was also excited to experience this part of my American history on Election Day. I was pleased to see so many of my fellow Americans taking advantage of our privilege to cast our vote in the election. And the demographic of those voting was so broad - different ages (we saw a mom with three children under the age of 4 standing in line and behind her was an elderly man), different ethnicity and I'm sure if we would have discussed it - many different political views. After months of disagreement and debates leading up to Election Day, I thought it was oddly pleasant that I felt a comradery with the other folks I stood in line with this morning. And I was also reminded that God has already chosen and He has not left His throne nor has He been caught off guard by the outcome of today's election.
My office suite mate and I decided today should be a holiday. What with the kids out of school and all the free food and the freedom to vote? Sounds like a holiday to me!