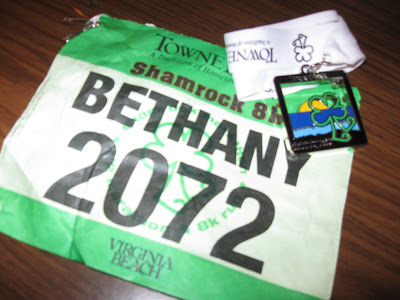 So, I've been waiting for pictures of the race to come before I posted on my Shamrock experience... unfortunately, the picture they sent to me was for the person with bib number 2022...mine was 2072. That part aside... I completed my first race a few weeks ago. It was an amazing experience - it was an early experience. I cannot tell you the anticipation that was inside of me the night before. I was so nervous about what to expect and going it alone since Laura (who had planned to run with me) had gotten sick that week and wasn't going to be able to run. It was almost a dread in my stomach.

I left our house a little after 6:00 am to meet up with some friends and drive down to the oceanfront where the race was being held. Once we got there, it was so much chillier than I had anticipated - which turned out to be a good thing once the race began. After waiting for awhile, we gathered at the START. I felt calm and so excited waiting for them to shoot the gun off to get started. 8:00 am arrived and the gun went off and the sea of people began to disperse and spread out. It was incredible. On the second half of my first mile I was struck with the realization that I was doing this...I'm doing this!

Running along the boardwalk was incredible - smelling the salt of the water and the sand, watching the sun climb higher over the water. I relished every part of it and completed in a time I was pleased with. I'll never forget running towards the King Neptune statue hearing my friend yelling my name from the crowd and me hollering back at her (like you would only do in an athletic/competition setting or camp, I guess) and busting across the Finish Line. Great experience...awesome feeling...and that was only an 8k... what do you think a half marathon would feel like?

Bethany, Awesome job!! Thanks for posting about the experience. That was a great accomplishment. I am sure you will be able to do a half marathon as well!! When do you have to decide by or have you already decided to do one?

Girl I am so proud of you!!! I cried like a baby when I did the rock and roll half. I couldn't stop crying partly because it was a race to raise money for my Mom's cancer and partly because I hurt so much. I was only sore for two days though so do the training, sign up and ENJOY it! It is something you'll remember the rest of your life!

I am so so so excited to run in a race this fall. That is my goal after I heal from the c-section. I was going to run in one last fall, but then was pregnant so I couldn't. But I am really looking forward to getting back into it!! YOur post made me all the more excited to start.
Great job!!!

Ah - bethany, I got goose bumps all over, and if I wouldn't have been in Panera I might have cried. Race stories are so compelling. I hope I can run in one someday!

Congrats Bethany!!! I have to say, you might want to be happy about not getting the pic - mine are always awful, when I'm in the middle of the race. Maybe that's just me though :)
I'm so glad you did this!

How sad they messed up your pics! I hope you can get them eventually! I'm so proud of you - it's something I would never dream of attempting!! I hope to hear of more such accomplishments in the future!

I think our good buddy Val has put on a few pounds since his batman days;)

I am so proud of you too! I would never dream of attempting something like this so wow! Great job getting to the finish line.